We Made National News!

Home/Blog/We Made National News!
Previous Next

We Made National News!

On December 22nd, our very own Parker White was interviewed by a reporter from the Associated Press. The reporter was working on a story about nonprofit organizations around the country providing food for needy children during the holidays. The article was featured on news sites around the country! Read the article in its entirety. 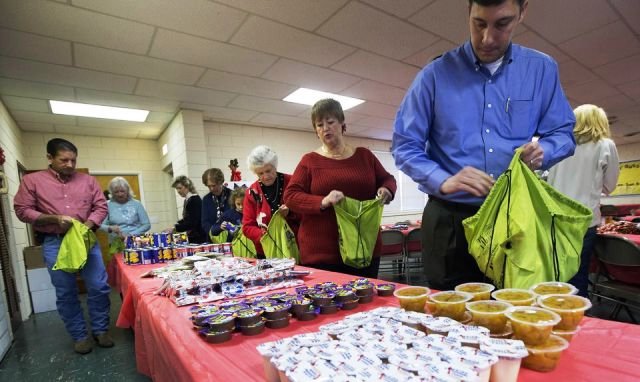 BIRMINGHAM, Ala. (AP) – Thousands of students are taking home a present from school for Christmas: Backpacks full of food to help prevent them from going hungry during the holidays. With the economy still lagging and government assistance programs facing spending cuts, public schools nationwide are serving as distribution points for free food that is loaded into backpacks and handed out discreetly to kids. Building on programs that provide students with food to sustain them on weekends during the academic year, volunteer organizations and nonprofit groups are providing backpacks full of applesauce, fruit cups, non-refrigerated milk, cereal and microwave lasagna to get children into the New Year.

Organizers say all the food sent home for the break is easy to prepare since many children will be home alone for the holidays while their parents go to work as usual. In one of Alabama’s wealthiest areas, Shelby County, the nonprofit Vineyard Family Services is doubling the amount of food it typically provides to each of the 475 students it assists on weekend during the school year. The need is actually far greater, said founder Ward Williams, since about 9,100 kids total receive free or reduced-price lunches in the county. “I think a lot of people have kind of been living on the edge, and many of them slipped off,” he said.
The East Texas Food Bank is doubling backpack food allotments to the 4,500 students it provides with food during the holidays, said spokesman Karolyn Davis. She said schools don’t have a hard time telling which kids need the help based on how they act on school days in the lunchroom. “If they are the first in line and eat everything on their plate and then want more it’s a sign,” Davis said in a phone interview from Tyler, Texas. “Kids cannot learn is well if they are hungry.”

Volunteers got together at Summerville United Methodist Church in Phenix City last week to pack food bags that will help keep dozens of schoolchildren from getting hungry over the break, and they do the same thing for other holidays, too. “We load them down with food on the holidays – Christmas, Thanksgiving, spring break,” said Brindlea Griffin, child nutrition coordinator for the city school system. Nationally, some 31 million needy children receive free or reduced-price meals through public schools, and many participate in summer food programs. But those federally funded programs generally aren’t available during winter break, leaving a gap in children’s diets. In Alabama, State School Superintendent Tommy Bice said backpack food programs provide badly needed Christmastime help for the more than 435,000 children who normally get free or low-cost breakfasts and lunches at schools.

“Our biggest concern is that our students are going to leave for two weeks and be hungry,” he told state school board members recently. The backpack food program is a major component of Feeding America, a national network of about 200 food banks coast-to-coast., said spokesman Ross Fraser. Fraser said about 230,000 students nationwide receive food in backpacks through the organization’s participating food banks, with most of the packs provided on Fridays during the school year. It’s unknown how many of those food banks provide additional food during the holidays, he said, just as it’s unclear how many faith-based groups or volunteers organizations might have “backpack buddy” programs outside the formal framework of Feeding America. But one thing is clear, Fraser said: the need is great, particularly during the holidays. The U.S. unemployment rate is at a five-year low but it’s still 7 percent, and food stamp benefits for more than 47 million Americans decreased last month, with a family of four receiving $36 less than previously. “This time of the year is one of the roughest because schools are closed and kids who get free or reduced-priced breakfasts and lunches aren’t getting them,” said Fraser.

In Greensboro, N.C., a nonprofit called Backpack Beginnings is trying to make up the difference by providing extra amounts of holiday food to the 975 children it typically provides with backpacks full of food. The organization’s founder, Parker White, said volunteers and teachers usually try to slip the food into children’s backpacks discreetly to avoid embarrassing any families, particularly when middle school or high school students are involved. But elementary-age children often are so happy to be getting food they let others know, she said, and they sometimes must take home the extra food on more than one day just because of the large amount. “Some of these kids are walking or riding buses, and you just can’t send them home with 20 or 30 pounds of food all at one time,” she said.

© 2013 The Associated Press. All Rights Reserved.