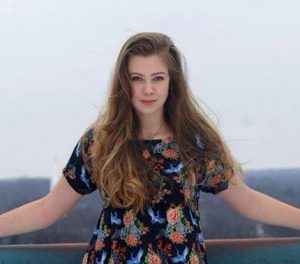 Jesse Herndon is a student at Weaver Academy.

We love the creativity of our volunteers and are always amazed with the unique ideas they come up with to help our organization!  Jesse Herndon, a 16-year-old junior at Weaver Academy, contacted us in December with an idea to raise money for our Clothing Pantry.

She was aware of our food backpack program at her sister’s elementary school, but when she learned of our Clothing Pantry, an idea popped into her head.  She has another sister who attends a school with a SMOD requirement, and she has learned about the difficulties many families face with affording and obtaining the required clothing.

Jesse decided to create a fashion show fundraiser that was held on May 3rd at The Blind Tiger, featuring clothing from Plato’s Closet and Patina Bridal and Formals. This ambitious project involved spending hours every day after school trying to locate a venue, obtain clothing from local stores, arranging live music, procuring snacks and water, finding models for the show, and seeking donations for a silent fundraiser.  Since Jesse does not have her license, she had to depend on getting rides from friends to meet with businesses and pick up donations. During the midst of all this planning, she also spent time every night voting for us during the Blue Bunny Helmet of Hope grant challenge.

“I feel like BackPack Beginnings, who gives clothing and food to kids, are really supporting (equal opportunities for students) and making the world a better place,” Herndon said. Jesse’s efforts really paid off!  She raised $639 dollars, all of which will go toward the purchase of SMOD clothing, and since the price of admission included a clothing donation, we also received 2 large donation boxes full of clothing! 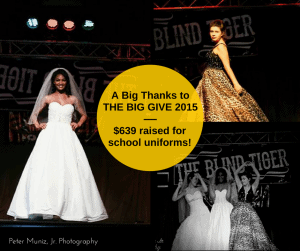