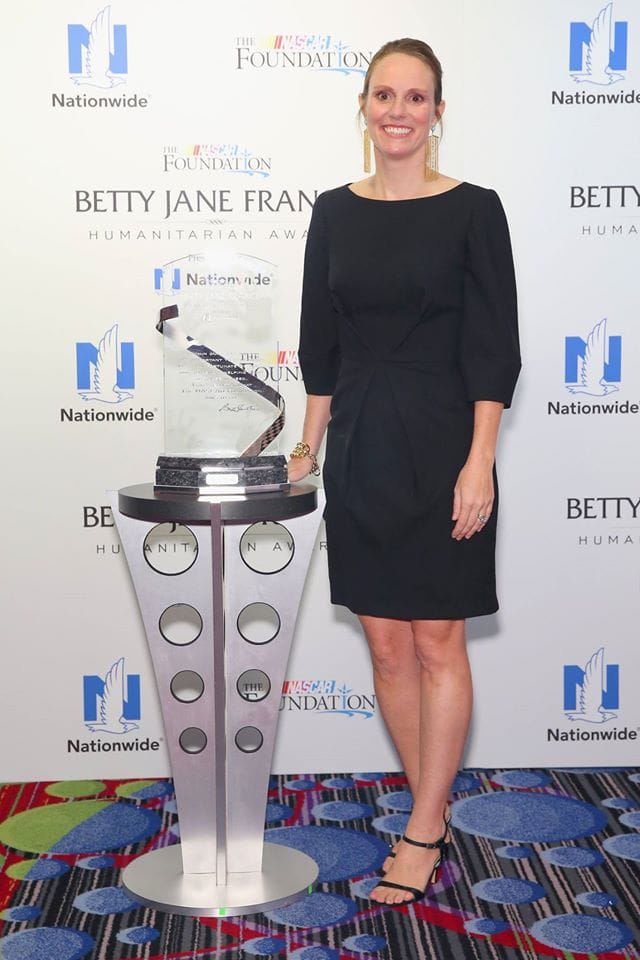 As a finalist, White received an expense-paid trip to New York. Accompanying White at the Honors Gala, were Hope Academy student and Greensboro native, Tanevia and her mother Aviance McCollum. This mother and daughter represent just one of the many families that benefit from the hard work of Parker White and the all-volunteer staff of BackPack Beginnings.

“The journey of being a finalist for the Betty Jane France Humanitarian Award has been an amazing opportunity!  The exposure brought to BackPack Beginnings is immeasurable, and it is an honor to be part of her legacy.” said White.

During her time in New York, White joined the other Betty Jane France Humanitarian Award finalists for the red carpet treatment leading up to the Honors Gala. Some of the events they took part in included visiting the 9/11 Tribute Center, Times Square and the Statue of Liberty.

This year’s award presentation was the highlight of the “10 Years of Giving” celebration for The NASCAR Foundation, which has donated approximately $25 million to impact the lives of children since its inception in 2006. The award recognizes outstanding charitable and volunteer efforts of selfless NASCAR fans, which is exemplified by White’s work.

During the Honors Gala, the finalists were introduced by NASCAR Sprint Cup Series drivers throughout the evening.

A fan vote throughout the summer months and into early fall decided the grand prize winner, Andy Hoffman from Team Jack Foundation. His charity will receive a $100,000 donation from The NASCAR Foundation to further research into finding a cure for pediatric brain cancer, a disease which affected his son Jack.

BackPack Beginnings, founded in 2010 by Parker White, a native of Greensboro and mother of 2 children, is a 100 percent volunteer-run and donor-driven organization. What started out as a feeding program in one school feeding 50 children has grown to a multi-program organization serving over 6,000 children a year.  If you would like to find out more or support BackPack Beginnings through in-kind donations, funding or volunteering, please contact Parker White at parker@backpackbeginnings.org or visit www.backpackbeginnings.org.