This past Sunday, I had to run to the local grocery store for my weekly groceries. With my four boys in tow. I didn’t have a lot of time so we ended up at the more expensive of the local grocery stores due simply to its convenience and of course, the promised land of sugar cookies that would be rewarded to said boys in tow. Sunday is not an optimal time to grocery shop by yourself. Add four boys to the mix and it becomes…well…even less than optimal. My “helpers” were pushing the cart down crowded aisles and before I could blink I had every Minion marketed grocery product in the store (well played, Illumination Entertainment). My budget was busted before I even got to the Dairy and Frozen sections and by that point, to be quite honest, I just didn’t care. I.JUST.WANTED.OUT. And you know EXACTLY what I’m talking about.

Groceries are an area where I realize I can save some serious dough though. And I should. It’s the only area in my personal budget that’s rather flexible. 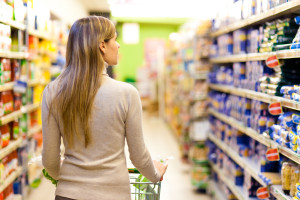 The Huffington Post put out an article recently about people living on a food stamp budget and it really helps put things into perspective: What It’s Really Like to Cook on a Food Stamp Budget.

A SNAP (Supplemental Nutrition Assistance Program) affords each member of a family $4 per day to purchase food from food stamp participating grocery stores. The obstacles that the article presents to impoverished people using these programs are ones that I had never even considered. They extend far beyond the simple challenge of grocery shopping on such a small budget. For example, many participants don’t have an easy way to get to the grocery store because they have to rely on public transportation. Another example is the time to plan and cook a meal. I think we can all agree that we face that obstacle in our busy lives. Imagine if you had no choice. Imagine if you didn’t plan and cook, then, well, you just don’t eat.

The article not only makes me stop and think about the cost of that luxury Minion yogurt sitting in my fridge right this minute (and I say yogurt because the other three yogurts were gobbled up before I could even put them in the fridge), but about the people who really can’t afford that luxury. It also made me think about how wasteful we can be with our groceries and how with a little planning, we may have an extra $5 at the end of our grocery trip that could put food into a local pantry, other than our own.

Maybe this article could help reduce our own budget and as a result of this reduction, we could help someone else’s budget.